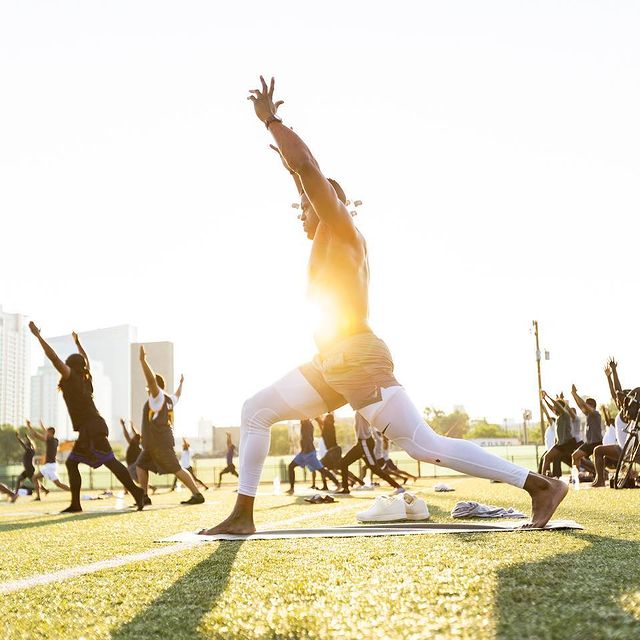 In 2020, Tristan Lewis and Andrew Smith were grappling with the tumultuous year. In January, Kobe Bryant died. In March, COVID-19 shuttered the country and transformed daily life. In May, George Floyd’s murder sparked Black Lives Matter protests nationwide. As the two men faced life, they realized they needed something to help boost their well-being.

“We were going through a lot of different traumas,” Smith, 32, a financial advisor in Chicago told TODAY’s Al Roker. “We needed to do something that was going to be good for our mind, our body and our soul.”

They approached a yoga teacher and asked if they’d teach a class one Sunday. That session made a huge impact on the 20 or so Black men attending.

“Multiple guys came up and told Andrew and I, ‘This is something I didn’t realize I needed,’” Lewis, 36, an information technology employee in Chicago, told TODAY. “We realized that we tapped into something in that moment.”

Soon that one-off class became a regular class and Smith and Lewis created The Healing, “a space dedicated to Black men to achieve their best selves, holistically.”

“Generationally, there’s been a lot of stigmas and stereotypes when it pertains to Black men being vulnerable or even just what a Black man is supposed to be,” Lewis said. “There is something encouraging when a guy can show up and lower his shame and be open and honest about exactly where he is in his life. And I think normalizing that behavior has definitely had an impact on guys in our community.”

But just being around one another helped many people, including Smith and Lewis.

“I was incredibly surprised … One of the things that I needed was community,” Smith said. “I needed to be around my brothers.”

Since starting classes, they’re both studying to become yoga instructors.

“There’s a lack of Black men teaching yoga,” Smith said. “When you enter into a room as a Black man, you’re scanning the room real quickly and seeing who is there who looks like you.”

In an odd way, the pandemic helped Smith and Lewis get where they are now. They hope to expand their reach by partnering with Black businesses and other organizations and even donating to the city, like they did with their holiday toy drive.

“I think what the pandemic offered was a sense of stillness that I don’t think we would have had … if the pandemic didn’t shut things down,” Lewis said.

What started as a one-off yoga class has transformed into a space where Black men can be "vulnerable."

Are you ready to make a difference in the lives of emerging adults?