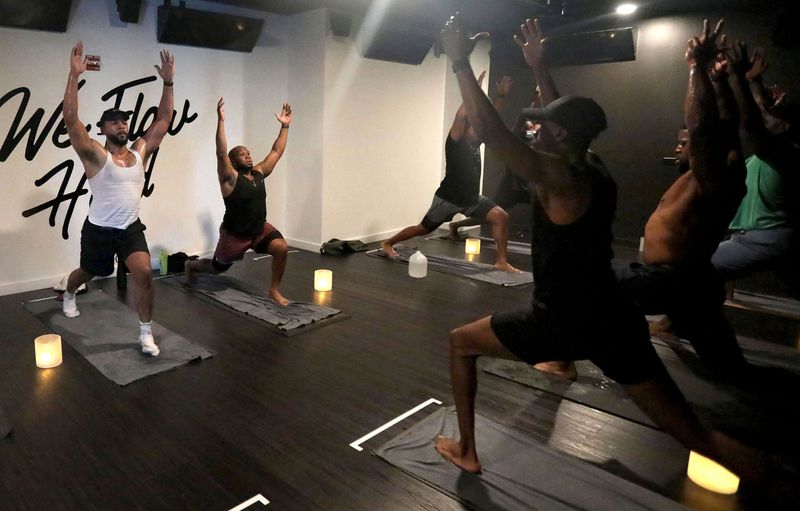 A group of Black men in Chicago are bending over backward to create community with one another after a year and a half of isolation, grief and trauma.

At least, that’s the goal of The Healing, a new nonprofit where Black men can practice yoga together — and then open up the floor to conversations about their struggles with mental health.

Over the past 15 months, Black adults have experienced higher levels of depression and anxiety symptoms than white adults, according to the Centers for Disease Control and Prevention. Last year in Chicago, Black people were 30% of the population and yet nearly 70% of the city’s COVID-19 deaths. And in 2020, 97 Black Cook County residents died by suicide.

The effect of a pandemic that suddenly changed the world; the fallout from the killings of George Floyd, Breonna Taylor and Ahmaud Arbery that spurred worldwide protests; the unexpected death of basketball legend Kobe Bryant, all urged The Healing co-founders Andrew Smith and Tristan Lewis into action. Lewis, 35, who works for a tech company and Smith, 32, who is a financial adviser, are relative newcomers to yoga. But both say they have long yearned for a space like The Healing to support them in the transitions in their lives.

From what began as just low-key weekly outdoor workouts last spring, Smith and Lewis realized they needed a way to process the sudden changes surrounding them. Through forming The Healing after meeting in a group chat for Black professionals in the city, they became partners and close friends.

“When we first had our initial session, 20 guys showed up, and every guy was like, ‘Yo, I didn’t know I needed this,’” Lewis said.

The Healing has hosted sessions in open outdoor spaces like football fields, and Smith and Lewis secure yoga teachers who look like the men who attend. When practice is over, it’s typical for attendees to congregate for up to 90 minutes — letting it loose in a custom typically reserved for the barber shop. And once a month The Healing invites women to practice alongside the men. Smith called the practice “transformative” for the dozens of men who have attended since June 2020.

“I would also say I think all those factors really allow guys to open up and access the mental benefits and rewards that come through yoga,” Lewis said. “We were all carrying a lot; it was a heavy time. And I think that stillness and the quietness that yoga offered was the thing that I feel resonated with the guys the most.”

The Healing is by far not the only organization offering mental health resources, or even yoga, to Black Chicagoans. Real Men Charities hosts yoga practices aimed at Black men at their men’s wellness circle at The Quarry in South Shore. Coffee, Hip-Hop & Mental Health is a full-service coffee shop that raises money for people of color to attend therapy and seeks to normalize conversations on mental health in those communities.

These groups are part of a larger surge of initiatives to address mental health at a time where “dual pandemics” of racism and COVID-19 are contributing to a nationwide crisis. Only 4% of psychologists are Black, according to the latest data available from the American Psychological Association, while Black people consist of just over 13% of the U.S. population.

So far The Healing has hosted Easter Sunday, Juneteenth and Father’s Day programs in partnership with other Black businesses, artists and organizations. And it has already ventured into philanthropy. Last winter it hosted a holiday drive for a South Side charter school.

Now Lewis and Smith aim to expand The Healing’s “wholistic” vision beyond yoga. They want to provide mentorship to Chicago school kids and do “some type of healing circle with these young men who have suffered a lot of trauma being from the South and West sides of the city,” Smith said.

Jazmine Price is a marriage and family therapist who has lent her services to The Healing’s community. Until last year, Price says she was the only Black therapist at the Downers Grove practice where she works. To her, The Healing is filling a gap in resources available due to the ongoing mental health crisis and shortage of Black therapists.

“I think it’s an opportunity for people to find themselves and find what works with them and for them, because I’ll tell people, therapy is not the only way to get healing or to be our best selves,” Price said.

Mike Fair, a member of The Healing who has attended sessions from the onset, said the group helped him navigate one of the most difficult periods of his life after his father died of COVID-19 last spring.

“I was just searching for community,” Fair said. “I was searching for, truly, peace. I was experiencing a level of grief that I hadn’t experienced up to that point in my life, but also with everything that was happening with the Black Lives Matter movement and civil rights, I was feeling a desperate need to rally around my people.”

Fair says he’s gone to therapy since 2018, but sessions with The Healing allowed him to “double down” on his emotional growth and make it a priority. With outside yoga sessions, Fair says men get together to celebrate their wins, give advice and support one another.

Price commends Lewis and Smith for stepping up to provide a space for Black men who are confronting their trauma.

“The reality is that they’re dealing with people’s lives, real lives. And they’re not running from it; they’re running toward them,” Price said.

Fostering a community that cares and rallying together to defeat the stigma of getting help is the purpose behind The Healing.

“Had Tristan and I had this idea much earlier, I think we would have gone further, faster,” Smith said.

Are you ready to make a difference in the lives of emerging adults?